To access the Facebook mommy groups she uses to find support and resources for her two children, Tammara Tucker has to hop on Wi-Fi wherever she can get it. “I usually try to find spots around my building,” the 33-year-old mom says over the phone from her Long Branch apartment. “But we’re not supposed to be out doing that. It has been a month of complete uncertainty.”

Tucker doesn’t have a data plan on her phone, which makes communicating difficult. “Most people don’t want to talk on the phone, they like to use Facebook Messenger,” she says. Prior to the provincial state of emergency, Tucker could access free Wi-Fi via her smartphone at the library or Tim Horton’s. As of Monday, the city had been shut down for a month, leaving Tucker and her kids—aged 13 and seven-months—without a reliable internet connection. “It’s shattering to realize you can’t provide in the way you used to,” she says. “There are so many resources that are online.”

Tucker and her kids are among the significant numbers of Torontonians whose experience of self-isolation and distancing during the pandemic doesn’t involve TikTok dance routines, online grocery shopping, and daily video calls. A fall 2019 study by ACORN Canada, a national organization of low- and moderate-income families, found cost was a significant barrier to digital equality in Canada. Only 80 percent of families with household incomes of $30,000 or lower were likely to have home internet access versus 96 percent with incomes over $60,000.

“I couldn’t afford home internet prior to COVID. How can I afford it now?” says Tucker, who receives monthly assistance from Ontario Works. “We’re already below the poverty line.” She doesn’t qualify for the Canada Emergency Relief Benefit. After weeks of delay—“I was told there were no caseworkers monitoring the files”—Tucker learned that she would qualify for an emergency fund of an additional $100.

Pam Ryan, the Toronto Public Library’s director of service development and innovation, is well aware of the digital divide affecting the Torontonians who are what Ryan calls “data poor.” During regular operation “we’d have many young people begging the library not to close at 8:30 so they could finish their homework,” she says. “And then they’d go out and sit on the lawn to connect. This is not new—just acute.”

Since 2016, the library has operated a Wi-Fi lending program, which provides six months of unlimited internet access via a thousand hotspot devices. The program, initially seeded by Google Canada, is now funded through the City of Toronto’s Poverty Reduction Strategy at a cost of $550,000 per year, or $50 a month per device. A 2019 TPL survey found that 51 percent of respondents said the library was their only point of digital access. Thirty-five percent said they used library internet to access online government resources such as benefits, EI, and citizenship applications.

“When people aren’t online, there is a pretty significant impact on social isolation, loneliness, and the necessary information in terms of being able to understand what’s happening in the world,” says Maddie Ritts, who works with a community mental health and addictions outreach team in the downtown core, serving primarily homeless or precariously-housed people with persistent mental health or other chronic health issues. “People are already vulnerable and this creates another layer of vulnerability.”

“My biggest fear is that my 13-year-old is going to fall through the cracks.”

Ritts says that while other areas of health care quickly transitioned to maintain service levels and continuity through video platforms, community mental health and its unique limitations weren’t prioritized in that planning. Check-ins are crucial. “The ability to connect non-verbally, through video, is just not something we’re able to do for any of our clients because very few of them have private access to the internet.” This means that Ritts’ clients can’t fill out forms for emergency benefits or check-in with therapeutic or social activity groups that offer important forms of social support and connection. “We just know that it’s inevitable we’re going to lose track of some of our clients,” she says.

Tucker is worried that her daughter Emily, who is in grade eight, is falling behind. “Her teacher is on Google Classroom, but Emily can’t partake,” she says. “This is a kid who loves school, who is scared and missing her friends. She’s supposed to go to high school next year and my biggest fear is that my 13-year-old is going to fall through the cracks.” The family diligently applied to the Toronto District School Board’s device loaning program but, almost three weeks after classes have resumed, they’re still waiting.

“Almost 30,000 families, some with multiple children in the household, have requested a device,” says Ryan Bird, a TDSB spokesperson. The delays, which could extend into early May for some households, are a result of the logistics of collecting thousands of iPads and Chromebooks from schools, then couriering them to students’ homes.

Bird couldn’t say how many student households requested internet access, but the purchase of 6,500 new LTE-enabled iPads provides some clue. Rogers is covering data service on these devices until the end of June, and Bird says the telecoms provider will also coordinate reduced-fee installations in select homes with devices but no internet. On Friday, the Ontario government announced that school boards across the province will do the same.

Until Emily is connected to school again, Tucker says she’s spending her days “painting, reading, writing short stories, and playing with her little brother. But I can tell it doesn’t give her what she’s craving.” She’s home from school without the easy distractions of YouTube or Netflix to keep her occupied. Tucker says it’s these little things that amplify each individual family member’s own sense of isolation. And oftentimes, she has to explain to Emily, who is missing her classmates and spends a lot of time looking out the window, that the neighbourhood kids gathering and playing are breaking the rules. “I tell her the truth,” says Tucker. “It’s the best thing for her.”

About the author, Anupa Mistry

Anupa Mistry is a writer and producer who is interested in the connections between art and communities. She hosts a podcast about creative sustainability and works-in-progress called Burn Out. 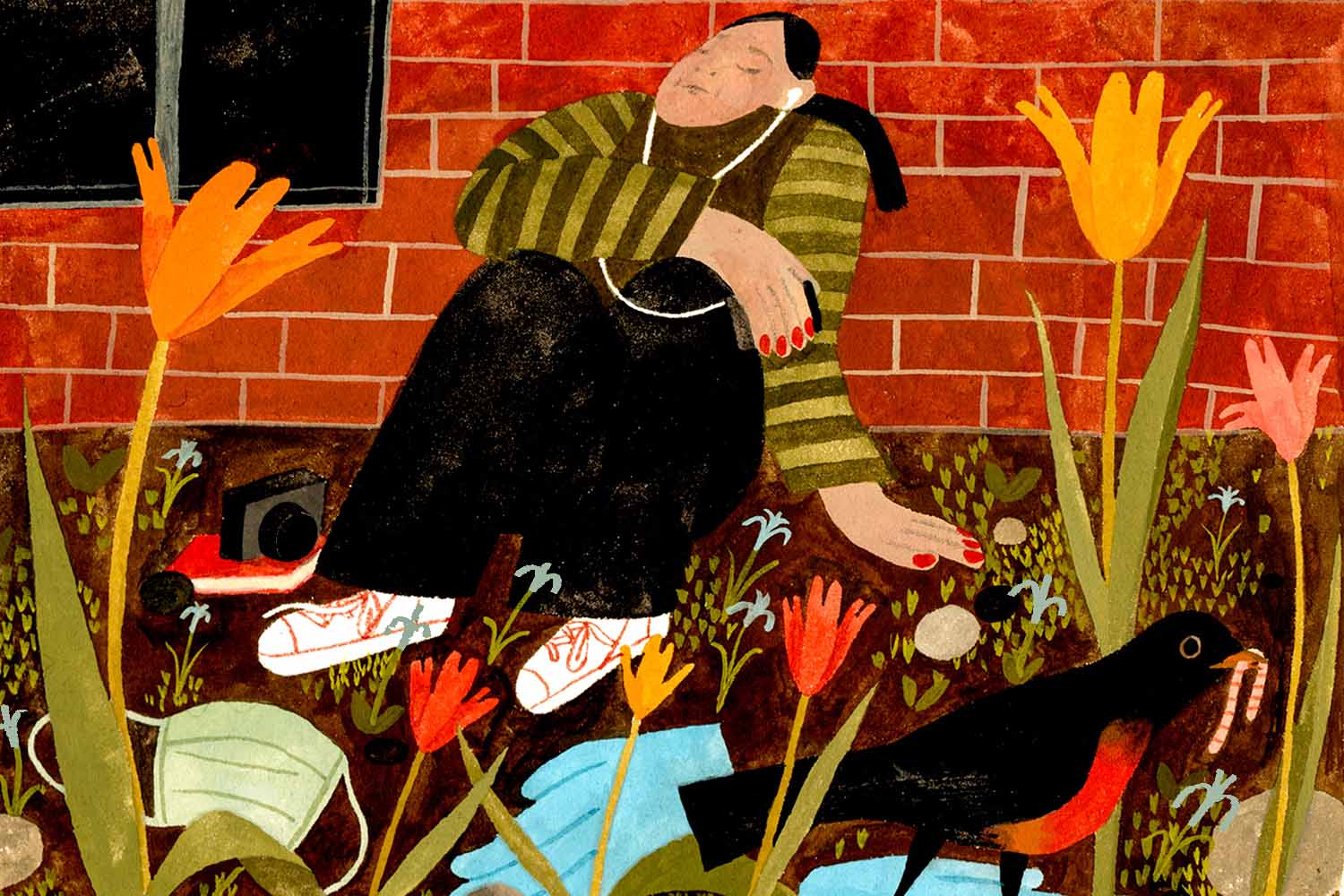